By default, an invoice is created by order ID in Phoca Cart. Order ID is an auto increment number. This means that it is automatically created in database and is unique number. A number series does not change by deleting an item, and deleted numbers are not replaced. 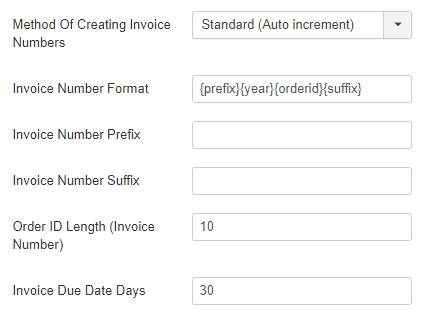 If 'Method Of Creating Invoice Number' parameter is set to annual or monthly basis, following additional rules are applied:

This applies analogously to the following parameters:

Be careful, you need to set correct order/receipt/invoice number format prefix so that the numbers are not duplicate or in conflict. For example, prefix cannot include only numbers so it is not in conflict with automatically created numbers (possible conflict between year/month number and prefix number).

If creating of invoice number is set up on an annual or monthly basis and order status is selected for this parameter, invoice will only be created after the order status has been changed.

The 'Create Invoice Number Based On Order Status' parameter will be set to: 'Complete'.

But it also means that: